The outlining algorithm, also known as the outlining structure or the document outline, defines six headings, <h1>...<h6>, that play an important role in the semantic structure of your document. It’s crucial that you understand it so you can implement readable documents.

The number in each of the headings represents a subheading of an earlier, higher-numbered heading, traveling all the way up to the <h1> element, which can be thought of as the root—or master—heading. Let’s look at an example:

Let’s introduce a lower level heading into the discussion, the <h3> element. In the following example, Forest Hills is wrapped in <h3> tags. It is a section of Queens, and, therefore, requires a higher-numbered heading than Queens. The following three elements can be thought of as follows: Queens is to New York City what Forest Hills is to Queens.

Changing the order of the heading elements or switching the content of either one would upset the logical outline of the document. Consider the following:

It doesn’t make much sense, does it? How about the following?

So, there are two rules to keep in mind.

Many authors make the mistake of choosing headings based on browser-defined font sizing rather than semantic fit, ruining the outlining algorithm in the process. To understand the problem, let’s first discuss browser-defined heading sizes. As heading numbers increase, the font size associated with each heading decreases. The <h1> element, for instance, is typically twice the size of the normal font, the <h4> element is equal to the normal font, and the <h6> element is somewhere between 67% – 75%.

As she marks her document up, she realizes that she doesn’t like the default size of <h1>, so she starts with an <h2>, and, for the second heading, the one she’ll need for the five boroughts, she prefers the size of an <h4> over an <h3>. Consequently, her final outline looks like:

However, the correct structure is

Here’s what both outlines look like in the W3 Validator: 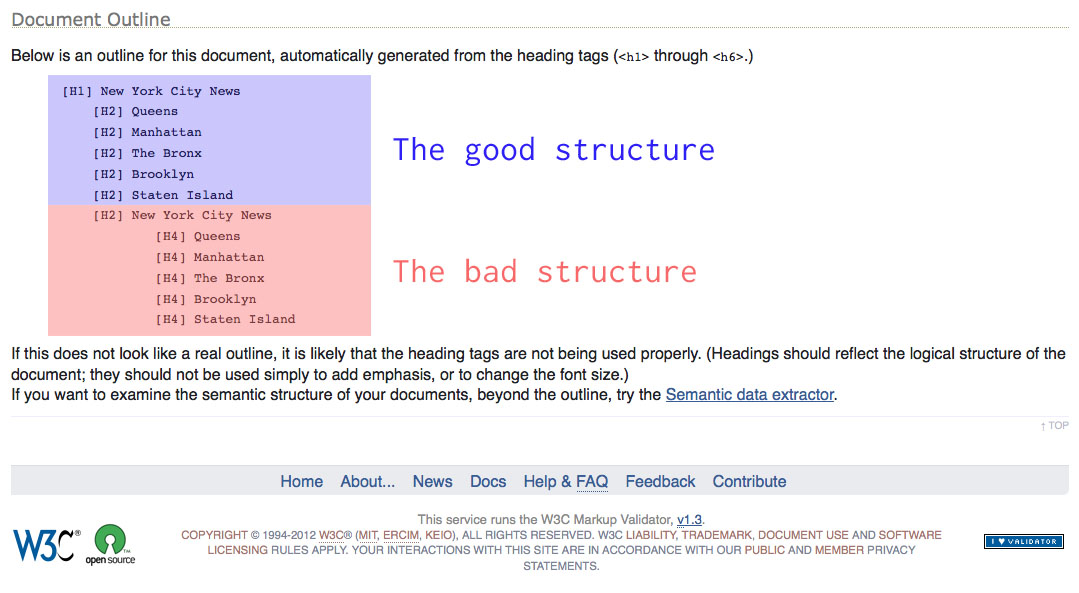 In the screen capture above, take special note of what the validator has suggested:

If this does not look like a real outline, it is likely that the heading tags are not being used properly. (Headings should reflect the logical structure of the document; they should not be used simply to add emphasis, or to change the font size.)

Creating subheadings in HTML5 is very semantic. Take this web site’s title as an example:

Because the <h1> and <p> elements are wrapped in the <header> element, it’s clear that <header>’s content is heading material. That the <p> element follows the <h1> solidifies the semantic subordination of the paragraph’s content to the level one heading.

It would also have been fine to use a <div> to get across the same idea:

If your subheading consists of just text-based content, then it’s more semantic to use a paragraph element for your subheading. However, if you plan to use images and text in your subheading, a division element likely makes more sense.

This site uses Akismet to reduce spam. Learn how your comment data is processed.